Showing posts from October 1, 2006
Show all
October 06, 2006
Asking voters to declare they are not illegal voters or even citizens is unconstitional. So says the 9th circuit. It was no accident that this was sprung just before the elections and there's no way they're going to get before the 9th en banc before the elections. Not that it would matter anyway. The full court will certainly re-affirm the decision. I expect this will go to the USSC sometime in the future and they'll overturn the decision. This ruling makes a mockery of our elections. The 9th should (once again) hang its head in shame.
Post a Comment
Read more
October 06, 2006
In response to the Kos article I referenced earlier : Dear Libertarian Democrats... What I propose is that Democrats promise to support one major libertarian experiment. In exchange for Democrats agreeing to support this experiment, libertarians would agree to vote for Democrats. The experiment that I have in mind is school choice. If Democrats would instead prefer an experiment with voluntary investment accounts substituting for Social Security, that is an acceptable alternative. But for now, let us work with school choice. The experiment that I propose is that in four or five diverse states, all tax revenues that ordinarily would go to schools would for a period of 15 years go to parents as school vouchers. Proponents of school choice will propose specific indicators that will be measured to assess whether the experiment achieves desired goals, such as improved school quality, lower cost, and greater parent satisfaction. Opponents of school choice also will propose specific i
Post a Comment
Read more
October 06, 2006
Give Hastert enough rope and he'll hang himself . I'm amazed he hasn't stepped down yet. Really, is there no one else who can run the party?
Post a Comment
Read more
October 06, 2006
Everyone is pounding on the Dems for their call for Foley's head in light of previous Democrat congressment who did worse and whatnot. Ann Althouse has another example that is a good one. Foley's behavior is inexcuseable and Republicans should operate by their own rules not create rules that are predicated on any other party's rules. Do what is right and ignore what other people do.
Post a Comment
Read more
October 06, 2006
Bill Clinton admits MSM is liberally biased. So, liberals, which is it? Are they biased or is Clinton a liar. (For clarity, we know he's a liar, I'm asking if he's lying in this specific instance.)
Post a Comment
Read more
October 06, 2006
More on the DPRK nuclear test: It was unclear when the rally took place, or how many attended, but it could show that Kim is trying to polish his credentials with the country's cherished military at a time when international pressure is mounting on Pyongyang. That was my first thought as well. Interesting that a demi-god needs to polish his credentials. Either he's doing a great acting job or he thinks things are going to get very heated. If it's the latter, he is worried that there may be a coup. I'm not sure a coup would be any better than the reign of the bouffanted gargolye. I think the best scenario would be total collapse of the state. I think it's too far gone to reform it at this point and it has to collapse completely to start with a clean slate.
Post a Comment
Read more
October 06, 2006 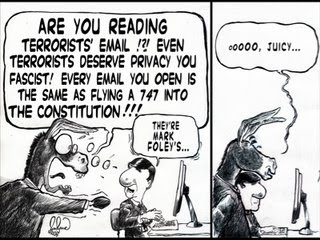