April 06, 2007
Both USA Today and WaPo are hammering Pelosi for her trip to Damascus.


Pelosi steps out of bounds on ill-conceived trip to Syria


But House Speaker Nancy Pelosi crossed a line this week by visiting Syria, where she met with President Bashar Assad.


Never mind that that statement is ludicrous: As any diplomat with knowledge of the region could have told Ms. Pelosi, Mr. Assad is a corrupt thug whose overriding priority at the moment is not peace with Israel but heading off U.N. charges that he orchestrated the murder of former Lebanese prime minister Rafiq al-Hariri. The really striking development here is the attempt by a Democratic congressional leader to substitute her own foreign policy for that of a sitting Republican president. Two weeks ago Ms. Pelosi rammed legislation through the House of Representatives that would strip Mr. Bush of his authority as commander in chief to manage troop movements in Iraq. Now she is attempting to introduce a new Middle East policy …
Post a Comment
Read more

Poetry of the Day

April 06, 2007
In Xanadu did Kubla Khan
A stately pleasure-dome decree :
Where Alph, the sacred river, ran
Through caverns measureless to man
Down to a sunless sea.
So twice five miles of fertile ground
With walls and towers were girdled round :
And there were gardens bright with sinuous rills,
Where blossomed many an incense-bearing tree ;
And here were forests ancient as the hills,
Enfolding sunny spots of greenery.

But oh ! that deep romantic chasm which slanted
Down the green hill athwart a cedarn cover !
A savage place ! as holy and enchanted
As e'er beneath a waning moon was haunted
By woman wailing for her demon-lover !
And from this chasm, with ceaseless turmoil seething,
As if this earth in fast thick pants were breathing,
A mighty fountain momently was forced :
Amid whose swift half-intermitted burst
Huge fragments vaulted like rebounding hail,
Or chaffy grain beneath the thresher's flail :
And 'mid these dancing rocks at once and ever
It flung …
Post a Comment
Read more

April 06, 2007
If you think our system of justice is brutal, barbaric and flawed, watch this video.

We may not be perfect but God help you if you get arrested in China.


Sadly, they both have a point they just insist on talking past each other. Senor Mustachio insists that is issue here is not that he's illegal it's that he was driving drunk. True, to a point. O'Reilly's point is that if the guy wasn't here in the first place, none of this would have happened. Bill is looking at this from a more macro perspective and for once, I agree with him. All of this ranting and raving on both sides smacks of theater. Either that or O'Reilly is really starting to think he's some wise pontificator. I really hope it's the former.

I always suspected but could never prove it. The sinking of the titanic was an inside job.

Now it's time for a beatdown of Mac users. If this continues apace we're going to have something aki…
Post a Comment
Read more

April 05, 2007
Warning: What follows comes from a deeply warped mind. At first I assumed this was simply an attempt to be funny that falls flat. I reread it and I think she really does believe this is exactly what would have happened.

Firedoglake imagines what might have been if Algore had won in 2000.


September 16, 2001: 150,000 UN-led troops, 100,000 of whom are US forces, leave for Afghanistan. Saddam Hussein, who as a secularist Muslim leader despises Osama bin Laden and is in any event eager to get back in the world's good graces, assists in setting up staging areas in Iraq for the UN. In Teheran, Iran's moderate leadership, which needs the help of the world community in beating back the conservative mullahs, agrees to let UN troops and planes pass through Iran unhindered.


Iraq eager to get back in the world's good graces? This is ludicrous beyond description. Further, declaring any part of Iran's leadership "moderate" is beyond belief. I suppose if you're …
Post a Comment
Read more

April 05, 2007
Al Gore graduates from Concordia and doesn't know if he's getting heckled from left or right. The interesting part here is that he allows for the possibility for heckling from the left. That means he's not in a media bubble and has undoubtedly heard the criticism of his mansion and it's energy consumption. The hard left is hardening and will cast out those who are insufficiently pure enough.

Pajamas Media is reporting heavy armor rolling in. I've been thinking about the "surge" for some time. Some are piling on as this is long overdue a view I used to share but now I'm not so sure. If the "surge" had been around since the outset or even earlier than now it may well have had a detrimental effect rather than a positive one. An overweening presence in the beginning would have made for more targets available and more friction with the locals. Continued large numbers of troops would have engendered support for the insurgents/terrorists. …
Post a Comment
Read more

April 04, 2007
Miriam is posting poetry today so I thought I'd follow suit:

Nature's first green is gold,
Her hardest hue to hold.
Her early leafs a flower;
But only so an hour.
Then leaf subsides to leaf.
So Eden sank to grief,
So dawn goes down to day.
Nothing gold can stay.

Always one of my favorites. Frost is the everyman's poet. Lyrical, evocative and simple.
1 comment
Read more

April 04, 2007
I rarely cover local topics but this one piqued my interest.

Christina to lay off 97 employees.

Well, Mr. Wise's abuse could have paid for two annual salaries. If I were The Decider here. Mr. Wise would have his wages garnished and any discretionary spending of his over $100 would require auditor approval.

It's stories like this that lead me to believe that the staff layoffs wouldn't be necessary if the amount of waste, fraud and abuse were reduced. Certainly there are some staffers that may not be required but that's a careful line to walk.

Here's the other problem and one which is personal for me. Those staffers who are experienced get first shot at any open jobs in the district. Sounds good, right? The problem is that a number of them are taking jobs at Delaware Autism Program. They have neither the ability or the desire to work with autistic kids. That is a very, very narrow skill…
Post a Comment
Read more

Except that as with most things, he's wrong.

"Experts say that at the time, Mr. Hussein’s scientists were on the verge of building an atom bomb, as little as a year away."


That was the conventional wisdom before the war. All this hue and cry about "lies" are Monday morning quarterbacking and partisan hackery.

Occam's Razor alone is enough to tumble this house of cards. Niger has two main exports. Uranium and livestock. The former comprises the vast majority of their exports. When Joe Wilson quoted an unnamed Nigerian official speaking about the Iraqis as saying “You know, maybe they might have wanted to talk about uranium.”

The fraudulent documents are believed by some to have been manufactured afterwards as a means of gutting confidence in pre-war intelligence. The Brits in the form of Tony Blair have said they didn't …
Post a Comment
Read more

Umberto Eco on mass tourism and it's unintended effects. The thrust of his article is that the masses bring cash which allow for the preservation of history. Keeping history from those same people dooms it to ruin and neglect. Eco is always interesting and this time he doesn't disappoint.

Fisking the pope's critics. I think the writer is unduly harsh on the New Yorker and it's readers but his point stands. Most writers don't understand The Pope (whomever he may be) or what his job is. Similarly, they are not versed in the faith so they get things wrong and gloss over other things carelessly.

Following up on yesterday's piece from The Derb, American Thinker has an insightful view on EU diplomacy and UK standing therein. He contends the goal was to drive a wedge in the Anglosphere.

Even ABC concedes the troop surge is working. I expect total silence from the "I -support-the-troops-but-not-the-war-and-i'm-showing-my-support-by-cutting-…
Post a Comment
Read more

How do I get from Dover to Dover?


Hundreds of people have been killed in Iraq during the last week, including 60 slaughtered in a similar Baghdad market on Thursday evening, as car and suicide bombers have continued to defy the new Iraqi-US security crackdown.


A security official told AFP earlier on Sunday that the Iraqi death toll was up 15 percent last month. US commanders openly admit there is no military solution to the lethal sectarian warfare, insurgency and rampant kidnapping.


I really doubt this is true. Does the reporter have a quote somewhere with some General saying "All is lost! My kingdom for a horse" or something? There is no solution that is exclusively military but that doesn't mean there won't be a military component. 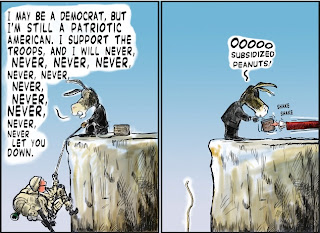 April 02, 2007
Paul continues his near religious ferver for baseball season. The latest in the series has him quoting 60's relic John Fogerty.

Now I like baseball. Or rather, I like the idea of baseball more than the game itself. In its ideal form, it's the quintessential American game. One with no clock and a great history filled with colorful characters and storied games. It's a warm summer evening with hot dogs and beer and the crack of the bat. All American family fun.

Back in reality, it's a game played by over rated, over paid whiners who make bowlers look like athletes. There are currently 19,514 teams playing 346,503,196 games in a season. Baseball now runs 24 hours a day until October. Then the playoffs begin which lasts until six minutes before Spring Training.

Tickets for a family of four cost more than the car you will drive to the park. There you will pay one week's salary for the privlige of parking next to two people who will slam their doors into your c…
Post a Comment
Read more

Pelosi Going to Syria Despite Objections

April 02, 2007
Pelosi Going to Syria Despite Objections. Personally, I'd title that one: